Our last adventure of Memorial day weekend was E's birthday. He turned one on Saturday, but we were out of town, so we celebrated on Monday when we got back.
The kids went shopping for a birthday present and even helped to make a cake. They decided on blue and red for the frosting. As is tradition, E got his own cake, and he ate it in just a diaper. 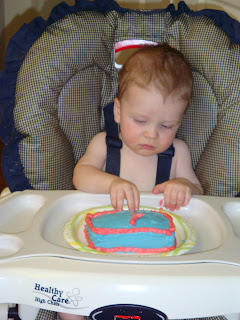 He's not too sure about it and the frosting. It took about 3 minutes before he would really touch it. 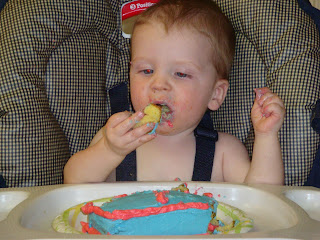 He's finally starting to get the hang of it, and actually kind of likes the taste. 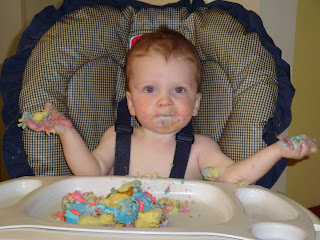 By the end, he was looking for just the frosting, just like most kids. The cake was good, but the frosting was better. 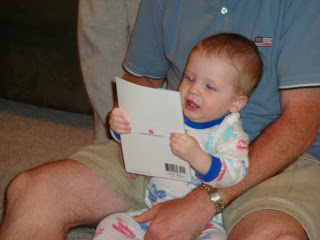 After a bath, he opened a few presents. He actually was trying to read the card. Funny! 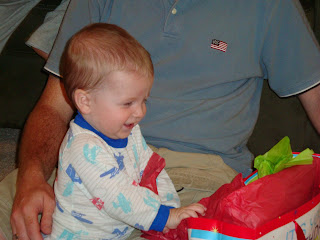 So thrilled with the tissue paper in the bag from Grandma. 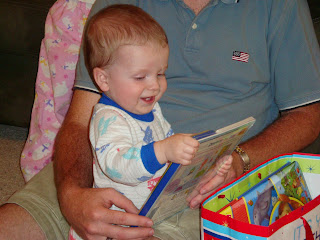 He loved the books and puzzle. Thank you grandma for the gifts!
I can't believe how much has changed over the last year. This little guy looks so much like C, but has such a different personality. He loves to laugh and smile. He seems to not be able to get enough of giggling. He has found that he likes to move. He's not walking yet, but loves to crawl and find any sort of trouble he can. He loves both his brother and sister and his eyes light up when they walk into the room. He can say 'da-da.' No mama, but he is a daddy's boy. He would rather have Daddy holding him than Mommy anyday. He loves his green fleece blanket and can't usually sleep without it. He will curl up with it anywhere, as long as the blanket is there. He has never really taken a pacifier, but loves his two fingers on his right hand. He is still taking two naps a day. He weighs 18 pounds and is growing well. He eats a lot like K in that he likes a lot of carbs, bread, sweets, crackers, etc.
We are sop happy for little E and all of the joy he has brought to our family. Happy first birthday squirt!

Is he seriously one year old? That is hard to believe! Such a cutie!