So, for those of you who don't know, today is Earth Day. We got to Virginia late last night, and put the kids to bed. When we woke up this morning, I was trying to explain to C that the trash can in the kitchen was for recycled items, not for trash. His response was, "So that means we put things in there that have a triangle and a number on it, right?"
Where does he come up with this stuff?
In honor of Earth day today, please recycle all of those things that have a triangle and a number on them.

It has been a string of early mornings recently. A few days ago I received a phone call from a dear sweet lady, Betty Skaggs. Unfortunately for me, Betty called at 4:30 in the morning. Unfortunately for her, I was not the person she was looking for. And an 8 months pregnant woman who does not like mornings to begin with is probably not a good person to wake up at 4:30 with a wrong number. I didn't go back to sleep for a couple of hours after that phone call.

This morning, luckily it was a little later. At about 5:30 I woke up to my bed shaking. I thought that it was the dog on the floor next to the bed, but she got up and bolted out of the room. And the shaking was still happening. Hey, I live in the midwest, it was probably just a gas tank exploding down the street. (It did happen once while we lived in Florida) It didn't last too long, so I didn't worry about it, really. Needless to say, I had a hard time going back to sleep. Finally, around 6:45 I turned the news on, only to find out it was an earthquake. Yep, that's right, an earthquake. In Ohio. It actually happened in Illinois, and it wasn't too big, but because everything is flat around here, the waves travel a lot further than other places. Luckily the kids didn't wake up and there was no damage in the area.

So, now I can say I have lived through tornadoes, hurricanes, blizzards and even an earthquake. I never thought that living in Ohio would bring so much excitement!

First, I had a Dr. Appt today and they did an ultrasound. I learned that babies not only have eyelids, but they use them. The baby kept opening and closing his eyes while we were watching. It was almost as if he was giving us dirty looks and saying, "Leave me alone, can't you see that I'm trying to sleep here."

I also learned that this baby has hair. Not a lot, and not sure what color, but they could see the hair on the ultrasound. How cool is that? I was really impressed. So, no name yet, but hair.

Just an update for those of you that are interested. He was weighing in at just over 5 pounds, which is more than K weighed at birth. And I still have 6 weeks to go. So, things are looking really good.

And what does that mean? I am going to go to Virginia next week and have the baby there. I know, its kind of a late decision to be making, but we decided it was best for our family and so that is what we are doing (**After being convinced by my wonderful and good looking husband that the primary will survive without me). The Dr. gave me the okay to travel anytime in the next two weeks so as long as I can make it there by then, I should be alright.

Here are some of the pictures from today. 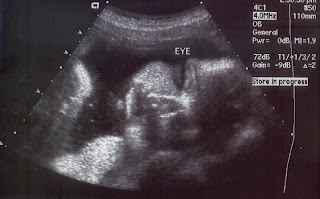 By far the best shot, of him on his side, eye open, dirty look and all. If you notice, he is sleeping with his hands up by his face, laying on his left arm. 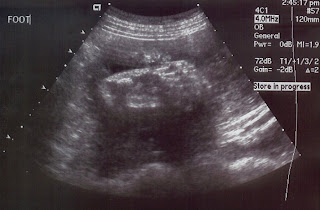 Just a foot shot. She had to practically go to my ribs to get this. 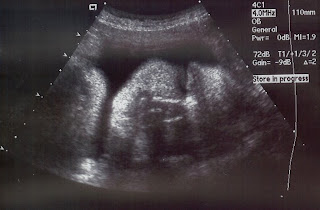 Another picture of his face sleeping, this time with eyes closed. 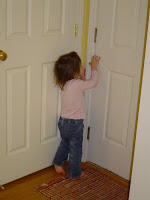 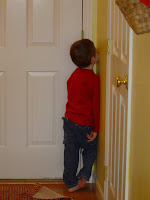 Yes, these are two separate corners, and yes, they are there at the same time.
Any questions?