Last week was Spring Break for the kids. SInce Jody and Golden have made the trip from New York down here twice since they moved there, I thought it was our turn to make the road trip up to their house. Drew had to get some work done, so it was just me and the 4 kids for another road trip.

Surprisingly, the kids did rather well on the drive up there. Though, I was beginning to question my choice when I got to Ithaca and the temperature was 35 degrees colder than it was in VA. What was I thinking going some place colder for Spring Break? Needless to say, it snowed a few times in the 3 and a half days we were there.

Our first day there we decided to go to Rochester. In downtown, there is a children's museum called The National Museum of Play. It was THE COOLEST museum we have ever been to. We spent three hours there and didn't see half of it. There was a real life Sesame Street, a train and a carousel, in the museum, crafts, crafts and more crafts everywhere you turn, a Storybook village where C and Reese enjoyed going on an adventure, giant tinkertoys, video games of all kinds and ages, an arcade, a real life grocery store with working registers, and on and on and on.... It is one that I will put on my list to be going to again. In fact, the kids were asking, as we were walking out of the museum (and only because it was closing) when was the next time we were coming back. 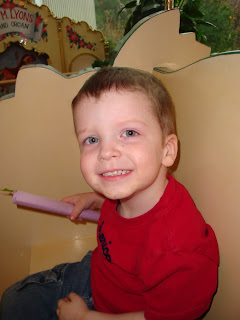 E riding the carousel with the magic wand he made. 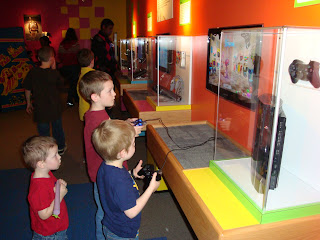 The boys mesmerized by video games. 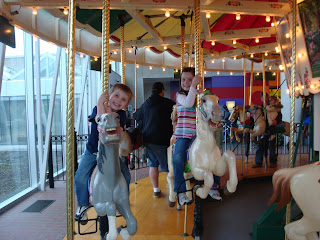 Ryan and K riding the carousel. 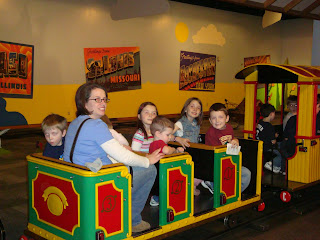 Riding the train with Aunt Jody. 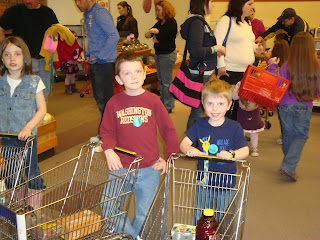 Reese, Ryan and C inside the Wegmans shopping.

And what trip to 'the big city' would be complete without a meal at The Cheesecake Factory. Yes, Jody and I are crazy. We took 7 kids, age 7 and under to The Cheesecake Factory for a meal. But, Jody loves the restaurant, and she doesnt get to go whenever she wants, so we went. And, the cheesecake was SO worth it.

Our next day, we decided to take it easy. We hung out at the house, played Wii, went to Wegmans for lunch, and had some much needed rest for the kids. This was the only day it was somewhat nice outside, so we sent the kids to play outside. Later that night, we were second guessing our decision, as we found a tick on Kallie. I guess thats what you get when you live in a place where deer frequent your yard. (I think we saw 4 or 5 while we were there.) That night, Jody and I stayed up super late to go to Target and shop, sans kids, and then color our hair. What more girly fun can you ask for with your sister?

On our last full day in NY, we went to the local wards playgroup. They were having an Easter Egg hunt. After they found their 10 eggs, we let the kids eat all of the candy (if they wanted to). Of course, K and E ate every last bit of it and C held off on his because he was "trying to be healthy." Later that night, Jody and I went to a Relief Society meeting about preparedness and safety. It was a really informative, really nice evening with some sisters.

It was a wonderful week with my sister and her family. I would love to go back, maybe when its not so cold there. 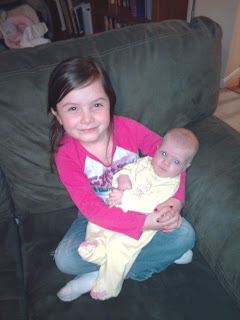 I can't believe the littlest Glass is already two months old. We went to the clinic today for a well baby visit. She is doing really well. She weighs 10 lbs 10 oz and is 23 1/4 inches long. So shes gained over 4 pounds and 2 inches in length. No wonder her clothes are starting to seem awfully snug. She has started to smile at you and will make random cooing sounds. She loves to sit and look at whats around her and just take it all in. She still wakes up at all hours of the night to eat, but I try to remember that she is supposed to do that, she is still a baby. She still looks like her older brothers and I think she just may keep those blue eyes. They seem lighter and lighter each day. We are love having her happy smile in our home. The older three kids can't get enough of her. They are always wanting to be helpful and play with her and put her 'plug' in her mouth. What a joy! 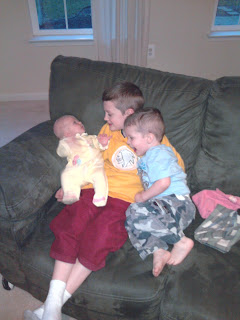 In other news...our lives are pretty mundane right now. We do school, work, homework, and chores. We are anxiously awaiting the return of spring for good. Maybe in the next few weeks we will be able to put away the winter coats and officially call winter gone. We still have two weeks until spring break and I think the kids are getting anxious. We have some fun things planned for that week so that should help with the boredom.

C has been taking piano lessons since last fall. He is doing really well and loves every minute of it. Most days I have to tell him to get off the piano to do other things. This week his piano teacher's family was sick. So she cancelled lessons, but asked for the parents to sit down with their kids and pass off their songs and assign new ones to them. C and I sat down and had his piano lesson this morning. I really enjoyed the time that I was able to spend with just him. With 4 kids its hard to spend one on one time with each of them, but this gave me an opportunity to spend time with him doing something that he loves to do. He was so excited that he was able to pass off all of his songs and move on to a few more. And I was thrilled to be able to see his achievements first hand and how hard he really works. I am so proud of him for working hard each day and practicing each day to be able to play the piano. I can only hope his love for music continues into adulthood.

After having a computer that runs so slow, I finally have something a little faster. We went last night to Best Buy to look. I promise, it was just to look. But, while we were there, they had exactly what I wanted on clearance for $200 cheaper than what I had been anticipating paying. So, I got myself a new laptop. Maybe that will help with my posting on the blog a little more. My old computer would take 30 minutes just to start up. No Joke! And then the kids would get onto it and mess it up and I would have to restart it and I just didn't have the time to sit and wait all day to get online. So, I didn't get online unless I could do it on my phone, and very rarely on Drew's computer. I am so excited to have something that works and works well. So, no more excuses for not posting...