...or two. I loved the last bag I made, but it wasn't quite big enough for my use. So, I found another pattern, and gave it a try. This is what I came up with. 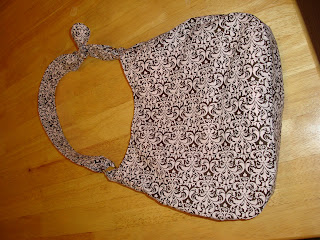 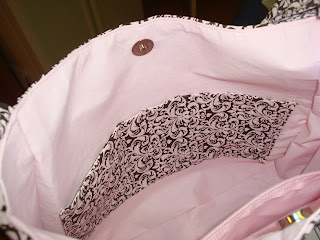 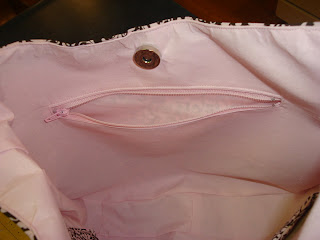 I loved this pattern, but it wasn't quite deep enough. So, after a few adjustments, I made yet another one. As you can tell from these pictures, this one fits all of my junk and I love it. 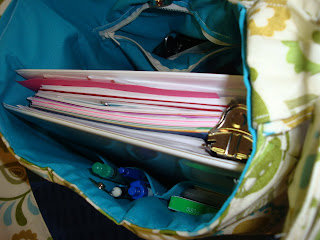 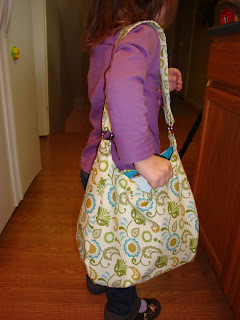 It's whats for dinner.

K: Mom, what are we having for dinner?

K: What kind of chicken?

Seriously, I don't make this stuff up.

What I did today

I have a hundred other things to post, but I am so excited about this, I wanted you to see. This is what I did today.... 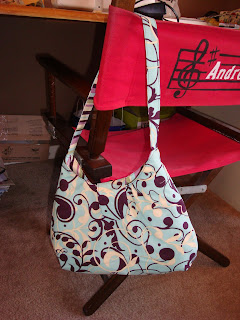 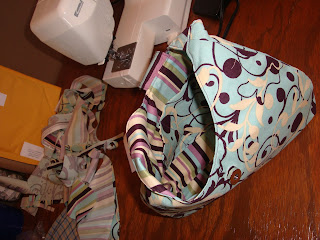 I found a great pattern online last week and decided that I wanted to give it a try. I think it turned out pretty good.

I can't believe it. My little girl turned 4 yesterday. She is a constant bundle of energy, from the time she wakes up to the time her head hits the pillow. She loves her little brother and cannot get enough of entertaining him. She is finally starting to think things for herself (as opposed to following big brothers lead). She loves to play with her dolls and doll house. She can easily entertain herself for hours at a time. Recently she has started to love to look at books. She is starting to pick out letters and even ask what words spell. She loves to listen to music and is always asking to have the radio turned up. She still loves pink and purple and the Disney Princesses, but has a few new favorites too. She loves to read Fancy Nancy, and will sing along with anything by Taylor Swift. Her constant grin is a source of true joy for me and everyone around her. She is easy to cry if she has been hurt, but mostly emotional hurt. She is as tough as nails when it comes to physical activity. She loves to be outside and is working on crossing the monkey bars in the backyard.

She grows up more and more everyday, especially now that she is home with me and E most days. She has taken on new responsibilities around the house and I couldn't be more proud of the person she is becoming. Happy birthday K! We are love you so much and are so glad that you are a part of our family.

I can't wait for the next 10 and what they bring. I love you Babe! 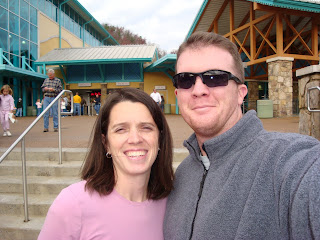 As mentioned earlier, C started riding the bus to and from school last week. He is loving it every time he gets to get on. His bus stop was originally at the other end of the street. (Some of you may or may not know, we live on the corner of our street.) Our street is about 1/4 mile long. So, after the first day, I asked the bus driver if they could put a stop at the other end of the street for C. She had no problem with this, and the next day he started getting off at the corner where our house it. Yay! Easier for me because I typically have 2 other kids napping at drop off time. Last week, I think on Thursday, I was sitting on the porch waiting for the bus. The bus came down the street, and proceeded to yield at the sign, and turn and keep going. No stopping to let a Kindergartner off. Luckily, our neighbor was right behind the bus, and he followed the bus until he could let the bus driver know. Drew had also come home early that day, do he jumped in the car and tried to figure out which way the bis went. Craig (our neighbor) caught her first, and let her know that C was still there. She turned around and brought him back to drop him off. She apologized profusely about forgetting that stop. Since its new, she isn't used to it yet. Not a big deal right?
Well, it gets better. Yesterday, Tuesday, it happened again. Except this time, I was home alone (with 2 sleeping kids) and Craig wasn't behind the bus. So, I called Drew at work, wondering if C was smart enough to say something. We figured he was, and I would wait for the bus to turn around and bring him back. Ten minutes later, still no C. So I had Drew call the transportation office and let them know. They radioed to the bus driver and she told them that she would be bringing him back in a few minutes. 40 minutes after his scheduled drop-off time, C was finally the last one off the bus for the day. The driver once again apologized and let me know that she has been doing the same exact route for 6 years and has never had a stop at that corner, so she is still getting used to it. I can understand that.
And, apparently, C did say something, but, even sitting in the seat behind the driver, is still not loud enough to be heard.
He was thrilled to get to ride the bus longer than normal. Let hope that me flagging her down from the corner helps and we don't have to play the game of "Lets find C" again.