Jana and I never really had our first dance since we kind of had some "unique" wedding receptions, so I guess we will live vicariously through this lovely bride and groom.

http://www.youtube.com/watch?v=A2G2ye4VKck (check out this Ute fan)

Just wanted to say Happy Thanksgiving to everyone. We hope you all enjoy the family, friends, and FOOD.
Sorry we missed the Turkey Bowl. We have a leaky roof and so I am going to end up on the roof, not to mention the extra people in the house kept me up late (always happens when family and friends come to visit).

Last week was C's birthday. I can't believe that he is actually 4! He knew exactly what he wanted for a birthday party and had it down to the cake, etc. He had been talking about it for several months. In fact, he had no idea what he wanted to be for Halloween, but he knew he wanted to dress up for his birthday party like a pirate. So, we had a pirate birthday party for him. The kids made their very own pirate hats and eye patches. We had a pirate ship cake, and there were lots of pirate presents (his favorite part, of course) We had a really great time and are grateful for friends who can come and share in our madness and excitement to make such a special day for him. I am posting a few pictures here for your viewing pleasure. 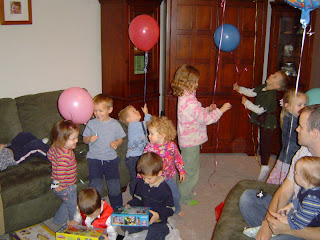 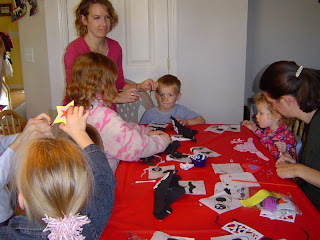 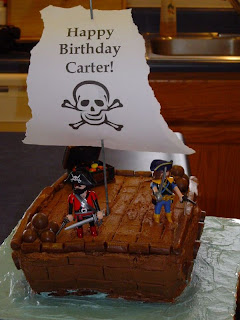 I was once stopped at a gas station on the west side of Orlando, FL where a

gentleman, about 30 yrs old, was filling up at the pump next to me. He saw the base decal in my window and asked if I was in the military. I told him that I was and he said that he was in the Army Reserves. He said that he was on his way to base for his Reserve Weekend. He said that his commander had talked to his unit on the last Reserve Weekend and told them that we all enjoy people thanking us for our service. He reminded them how it makes us all feel good to acknowledge the efforts of our older generation that has served before us, but he asked, “How often do we thank each other for what we do? How often do we thank our brothers and sisters in arms for their sacrifice and dedication?” His commander challenged them to go out and thank a fellow brother or sister in arms. He thanked me for all that I do, and then he popped me a salute that only the sincerest of persons could render. As I returned his salute, I stood there and promised to myself that I would take his commander’s challenge, and so that is what I do today. From one soldier to another,
Thank You
and
HAPPY VETERAN’S DAY!! 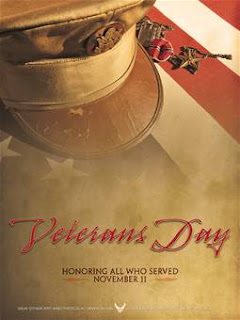