The wedding was on Saturday. It was a beautiful day. Drew and C left with Grandad early to go meet the rest of the boys in the Bridal party. They were able to get ready at Merediths dad's office, which is almost next door to the church. They then walked over to the church. K, Nonnie, E and I met them at the church. 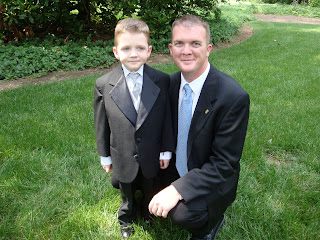 C looked so handsome in his tux. I can't believe how much he looks like Drew in this picture.
The ceremony was beautiful. It was so wonderful to see the love that Dale and Meredith share. From Meredith walking down the aisle through the entire ceremony, they were both wiping tears.
C and Layne did a wonderful job as the ring bearer and flower girl. 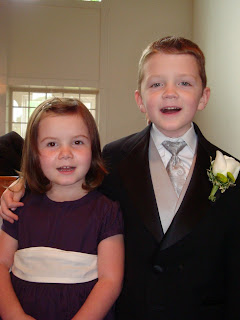 Here is a picture of C and K after the ceremony. 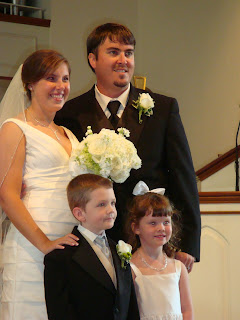 C, Layne, Meredith and Dale after the ceremony posing for pictures. 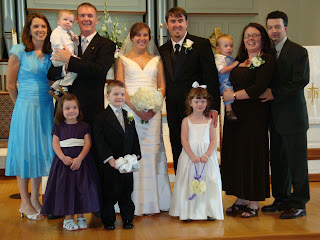 Here is the whole family.
It was a beautiful ceremony and we were so lucky to be able to witness it.
After the ceremony, and pictures it was time to party. C, because he was part of the bridal party got to ride in the limo with the rest of the bridesmaids and groomsmen. He was thrilled. I wish I had a picture of he and Layne buckled into their seat drinking their bottled water. So cute!